If you are unfamiliar with infrared heat radiation, some theory follows below.

What is infrared radiation?

Infrared radiation is a type of electromagnetic radiation similar to visible light, but has the highest heating effect in the whole electromagnetic spectra.The IR wave length spectra goes from approx 0,8 μm to 1 mm and is located between visible light (0,38-0,76 μm) and micro waves (>1mm). The IR-spectra is usually divided into Short Wave (SW), Medium Wave (MW) and Long Wave (LW) according to the electric spectra diagram.

Industrial IR-systems normally use heat radiation within the short wave or medium wave area. The heat radiation can be electrically generated by rod shaped IR-lamps with a tungsten wire heated to max 2000-2500°C (SW), mounted in IR-heaters or heating modules. As an alternative, MW-radiation can be emitted from Gas-IR modules heated by gas to approx 800-1000°C or electrically generated from MW-lamps or ceramic elements at somewhat lower temperatures. All bodies are emitting infrared radiation corresponding to their temperature all the way down to the absolute zero point (-273,15°C). The wavelength at which the radiation has it’s maximum decreases with increasing body temperature according to Wien’s displacement law illustrated to the right.

The displacement of the wavelength spectra explains why we can see when a body becomes hot enough to glow ( ̴650°C). Enough of the emitted radiation will then fall into the visible light area, which the human eye can detect. The total emitted radiation from a body (emitter) is proportional to the absolute temperature (K) in the fourth power (Stephan-Boltzmann’s law). The practial use of these physical laws is that an IR-emitter with highest intensity is built with short wave lamps often closely packed. 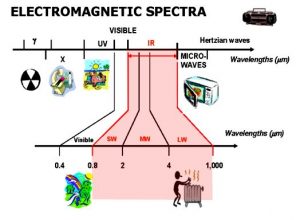 With the right IR-technology for your business, the company can have a rational heating or drygin process at a lower energy cost.

Shortwave IR gives full effect in a second without heating the surrounding air.

With the right IR technology for your business, the company can have a rational heating or drying process at a lower energy cost.

High efficiency with proper application and regular maintenance. Internal and external purity is important as the IR module is an optical system.

… exactly where you want it, with suitable reflectors. 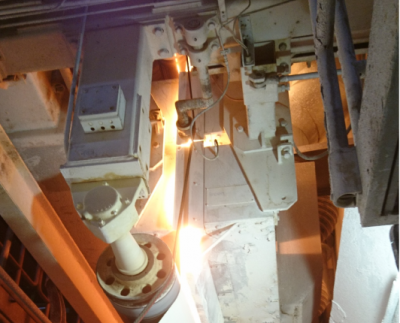 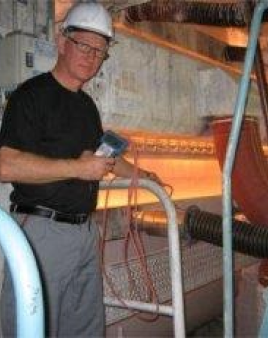 The IR radiation was discovered by Sir William Herschel in 1800 but did not find real industrial application until the 1930s, when car paint was dried with lighting lamps in special reflectors.

The IR intensity was then only about 5kW / m² to compare with today’s high-intensity IR dryers in the paper industry, which can give a maximum of close to 600 kW / m².

Feel free to contact us through the contact form if you have any questions about our products or services.